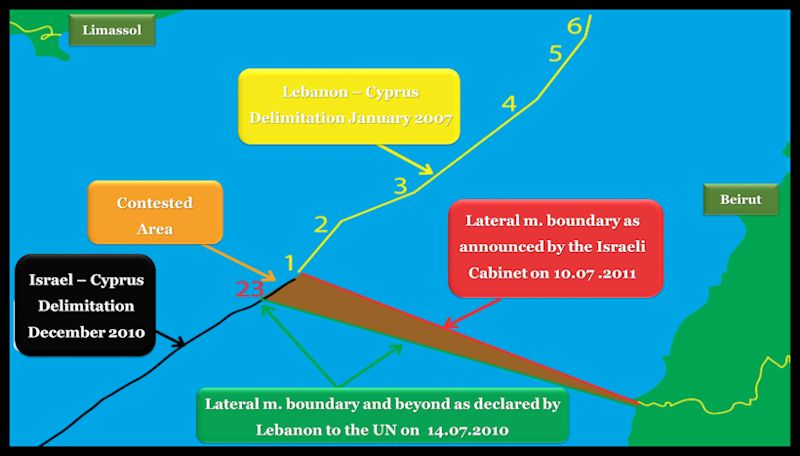 Lebanon’s delimitation of its Exclusive Economic Zone (EEZ) is a classic example of a messy procedure that in the end has permitted Israel to try to move north its sea border with Lebanon.

Initially, in 2007, Lebanon established the delimitation of its E.E.Z. with Cyprus along six equidistant points from north to south with the possibility of additionally extending Lebanon’s borders north and south. Later, the Parliament did not ratify this agreement, and in 2009 the council of ministers adopted a more precise second delineation, whose new extended geographic coordinates (with extended north and south limits in order to have triple-point borders — with Cyprus and Syria in the north and with Cyprus and Israel in the south) were passed to the United Nations in July and October 2010. Lebanon’s new delineation was based on the legal recommendation of the United Nations Convention on the Law of the Sea (Unclos).

It’s not difficult to understand why Lebanon did not immediately state the final dimensions of its E.E.Z.: The difficult relations among the involved countries are certainly the primary reason. But, bilateral negotiations are not the best way to trace borders involving more than two countries.

In fact, when in December 2010 Cyprus and Israel agreed on the their borders, they did not consider the mechanism for extending north and south Lebanon’s E.E.Z. according to the bilateral agreement between Cyprus and Lebanon of 2007. Later Israel sent the coordinates of its E.E.Z. to the U.N. despite the overlapping of 874 square kilometers with Lebanon’s E.E.Z. In sum, this is the essence of the problem between Israel and Lebanon in relation to their overlapping E.E.Z.s.

A final consideration, if, on the one side, Lebanon could have probably acted in a more consistent way in order to state the borders of its E.E.Z., on the other hand, it’s also true that Israel’s claims are, legally speaking, not well substantiated.